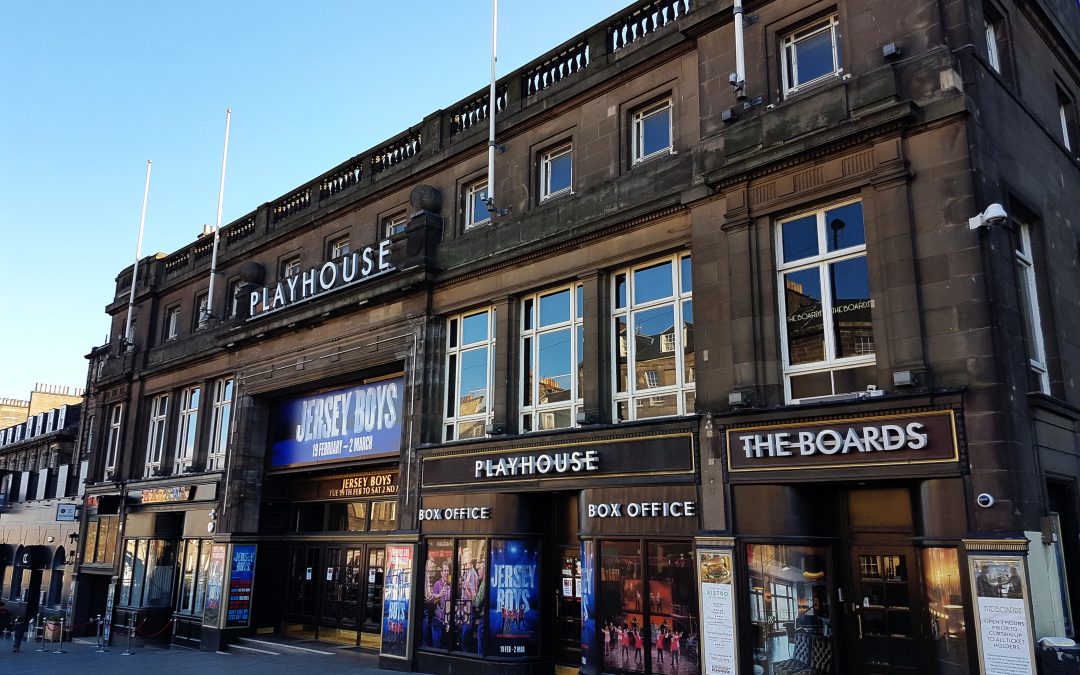 Back in 1977, chef and businessman, Mr Abdul was excited and raring to go when he opened Shezan restaurant directly opposite Edinburgh Playhouse Theatre.

Following the success of Cafe Shabab near Glasgow, Mr Abdul had a hunch that his distinctive Punjabi cuisine served from his new restaurant at the top of Leith Walk would be applauded by the Edinburgh natives and visitors alike. 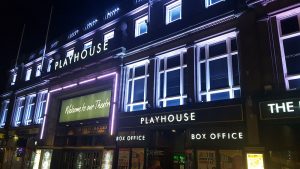 Edinburgh Playhouse is one of the largest theatres in the UK.

In the cold and dark winter of 1977, however, the future of Edinburgh Playhouse was uncertain as it faced the prospect of demolition, following the end of the golden age of cinema and the growth of TV and home entertainment from the 1950s onwards.

To add to its woes, the great and the good of Edinburgh failed to see the derelict cinema’s massive potential as a music and theatre venue.

Its plight is hard to believe now since one of the largest UK’s theatres is central to Edinburgh’s cultural life, showcasing sell-out shows for everything from well-loved musicals, rock & pop concerts and comedy from the likes of Kevin Bridges.

The site at Greenside is historically significant. One of two surviving plays from 16th century Scotland ‘A Satire of the Three Estates’ was performed outdoors there in 1554. And a ‘tabernacle’ existed at the location from around 1600 but was demolished to make way for the construction of the Playhouse which opened in August 1928. 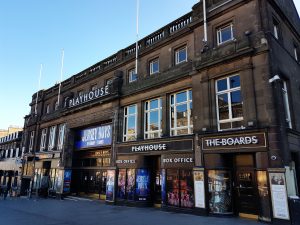 Architecturally inspired by the Roxy Theatre in New York, this new theatre had 3023 seats making it one of the largest in the UK.

Despite its 50 dressing rooms and vast stage, the venue would have to wait several decades before it hosted music concerts and theatre productions since its opening coincided with the arrival of silent movies featuring live performances from an orchestra with a huge Hilsdon organ that would magically raise to stage level during intermissions. During the 1930s-1950s the Playhouse showcased films with synchronised sound (The Talkies).

Going to the cinema was a new phenomenon back then. To give you an idea of its popularity the Playhouse still holds the British record for the attendance record with three sell-out shows in one day! Laurel and Hardy visited the cinema in 1932 and footage of this event is available on YouTube.

By the 1960s the Edinburgh Festival had grown in popularity, and a new venue was deemed necessary. The council at the time (Edinburgh District) and various arts organisations had their hearts set of building a new opera house behind the Usher Hall on Castle Terrace (now Saltire Court), but many experts believed the site too small (1,200 maximum capacity) and could never meet the exacting acoustic requirements of both theatre and opera.

The search for a new venue continued into the 1970s and was a hot topic of debate at the time, which didn’t go unnoticed by local amateur and professional musicians. Chief amongst them was Colin McDermott, who worked tirelessly firstly to save the Playhouse from demolition and then to convert it into the thriving house of entertainment we see today.

McDermott was an amateur violinist, yet despite working full-time in a demanding job at Ferranti (now Leonardo), he spearheaded a campaign to save the venue and establish the Edinburgh Playhouse Society (EPS) and work in tandem with STOPS (Scottish Theatre Organ Preservation Society).

EPS eventually convinced the then Lothian Regional Council to purchase the Playhouse (they backed out previously). However, additional funds were needed to restore and upgrade features such as the orchestra pit. The Hilsdon organ was removed during this work and currently resides in working order at STOPS, Greenlaw in the Scottish Borders.

However, EPS’ successful fundraising campaigns, that included a lottery, paid for this restoration work and the Playhouse opened as an outstanding venue for music and theatre in 1980.

But the story doesn’t end here.

A controversial twist in the tale included the selling of the Playhouse in 1983 by Edinburgh District Council after just three years of ownership (remember they originally wanted to build the new venue at Castle Terrace and didn’t see the potential in the Playhouse).

Considerable changes in local government resulted in the abolition of Lothian Regional Council (the original saviour) and the Playhouse ownership transferred to Edinburgh District Council, who promptly sold it privately to Norman Springfield in 1983.

Since then it has changed hands with the likes of Apollo Leisure, SFX, Clear Channel Entertainment (Live Nation) and the current owners ATG who stage famous shows and musicals like the Lion King.

As McDermott concludes in his book, the Edinburgh Playhouse has played a leading role regenerating the top of Leith Walk and increasing footfall for many bars, hotels, and restaurants like Shezan. 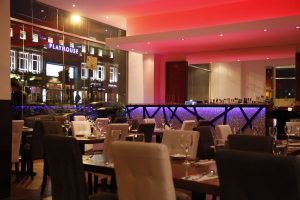 The opening of Shezan back in 1977 proved a wise move with hindsight and Shezan’s pre-theatre menu continues to delight Playhouse audiences to this day. In 2011, Mr Abdul’s sons assumed management of the restaurant and refurbished the premises with a modern and Bollywood inspired interior.

Josh Mathie
19:47 02 Jun 20
Our go to curry house in Edinburgh, really tasty food and friendly staff. Just so happens we live upstairs from one of... the chefs. They won't let you leave dissatisfied!read more

Gina More
22:23 10 Mar 20
I always pop in here when I'm in Edinburgh. The food is interesting, delicious and well presented. The service is... impeccable. Well worth a visit.read more

Robbie
09:48 15 Jan 20
Food was tasty and enjoyed by all.Multiple errors from order, which were corrected by an attentive and apologetic... member of staff, but service could have been improved by communication between order taker and server to eradicate the need to ask what everyone ordered when food was ready. Starters were also presented staggered which wasn't the best for only a table of 5.Given it wasn't a busy time or day, the experience could have been betterread more

Meg Towler
17:08 26 Dec 19
Great food, and very friendly servers. They were super busy on Christmas Day, so ordering and food was a little slow -... but that was completely fine.read more

Graham Swan
10:10 17 Dec 19
Was planning on Cosmo but it had an hour wait so I found this place on Google maps. The family was very happy we did... too! The meals we were served were tasty, the portions were also a decent size and the staff very friendly and welcoming. I would have no problem going back or recommending this place.read more

Chris Templeton
08:05 16 Dec 19
Great food here. Had the prawn poori for starter, which was delicious. For main I had the North Indian Chilli Garlic... Chicken, which was probably the best one I've had. Great flavour and not just stuffed with chillies and meaningless heat.read more

Anne waugh
20:11 07 Nov 19
Just been here for a meal for my birthday and it was amazing, probably the best Indian meal I've had and reasonbly... priced. Will definitely be back. Staff are very friendly and attentiveread more

Spencer New
10:01 31 Oct 19
A very good curry house, with friendly, attentive service. The food I ate -Karahi- had deep flavour and balanced spice.... Awards on the walls are a testament to its quality, from people far more qualified than me, but I do agree with them all. If I were native to Edinburgh this would be a regular haunt.read more

J Wms
23:09 02 Jun 19
Probably one of the best meals we had during our U.K. roadtrip (Wales, England, Scotland). Perfect heat and spice,... plus, the garlic Naan bread was amazing. The staff was fantastic!read more

Mariah-Rose M
00:04 02 Jun 19
really excellent food, and super kind waitstaff. Raza answered all our questions with patient eloquence and hooked me... up with the level of spicy my heart truly desired. 10/10 would eat againread more

Carol Dobson-Stewart
21:19 01 Jun 19
Wonderful as always. Food amazing and always hot. Great table service. I had Punjabi chicken, rice and roti. My wife... had Madras and really enjoyed it too. As we have been to India many times before, we can definitely recommend Shezan as their food is authentic.read more

NthDesignMarketing .
09:52 30 May 19
Shezan has been serving Edinburgh natives and visitors from its premises opposite Edinburgh Playhouse since 1977. The... restaurant is stylish and modern with a Bollywood theme. Staff are attentive and helpful. Recommend dish is the Karahi. Adapted from Shezan's website: "The Karahi is a traditional cast iron Indian cooking bowl. Many centuries ago the mighty armies of the Moghul dynasty used it as a multi-purpose preparation, cooking and eating utensil. Shezan prepare these dishes with herbs, spices, masala sauce, fresh garlic and ginger. A truly wondrous dish."read more

Alan Berrie
16:03 26 May 19
Great curries,well presented and the Naan bread is huge(one will do two)

Catherine Tsai
20:56 24 May 19
My airBnB host recommended this restaurant. I ordered the chicken wing; my husband ordered the lamb chop. I asked to... have nan instead of rice. They allowed to switch without extra charge. The soup came with the meal is very tasty. Both lamb chops and the chicken wings are very tender. Overall the taste and the service met our tasty.read more

Madhusudhananan Nair
06:05 07 May 19
Tandoori paratha was as thick and hard. The curry was of different taste Not a good joint. Food taste is poor. The... waiters are unprofessional. Theread more

Alejandro Fernández Otero
10:18 25 Apr 19
If you see the dirty kitchen you will understand. Also they make you think that is one of the best hindian's food... restaurant in Edinburgh and not at allread more

Craig Paterson
09:24 23 Feb 19
Brutally disappointed in the visit here. Panner tikka, the sauce was thinner than water with no sign of onion or... peppers. More like cheese floating in orange water.Watch out for the poppadoms, 65p each but stacks of 16 are expensive! Don’t think I’ve ever paid so much for them in my life. They also had some construction work going on too - always good to add to the atmosphere. Staff didn’t seem bothered and dirty looks from staff associates wasn’t great. Lots better options nearbyread more

Giles Moss
00:40 17 Feb 19
A fine curry. I visited with a party of 6 on a Saturday evening, they were busy as one would imagine but service was... reasonable considering. The large open dining room meant the atmosphere was a bit stark, but everyone enjoyed their meals nevertheless.read more

Andrea Walker
16:27 13 Jan 19
10 of us had a fantastic meal on Hogmanay. It was quite busy, but the staff were amazing, very attentive and chatty,... nothing was too much bother. The food was excellent, we all had different dishes and all were thoroughly enjoyed. We will return.read more

Lynn Oneill
08:19 13 Jan 19
Food was excellent. Service was quick and friendly and there was a good atmosphere. My friends and I (4 fussy... females) were served by Yousef, who ensured we had everything we needed.? Great place to eat would recommend ...... and lovely large nans.read more

Suzanne Mann
20:25 04 Dec 18
As a female traveller on my own I found Shezan to be a very welcoming restaurant with extremely polite and pleasant... staff. The food was to die for and very reasonably priced. Will definitely be back againread more

Lesley Waters
11:28 15 Oct 17
Had a lovely meal here. Great food which was well worth money. We were served by Raz excellent service. We will... definitely return. Highly recommendedread more
See All Reviews